Yakult, aside from being healthy, is also one of the tastiest ready-to-drink milk out there in the local market. I italicized “milk” because it’s not your typical milk – it’s actually probiotic milk.

That means it’s cultured – in other words, it has beneficial bacteria in it (say it with me: Lactobacilli Shirota strain). And that’s the main reason why Yakult comes only in small bottles. Why? Let me explain further. 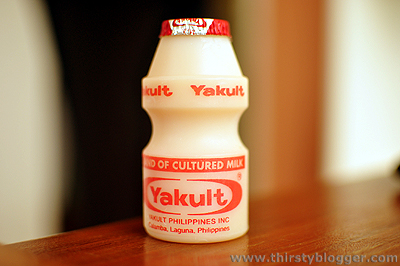 When you open a bottle of Yakult, it becomes exposed to airborne bacteria. If you leave it open long enough, then it becomes infected and the “good bacteria” in Yakult becomes compromised. And you don’t want that to happen.

So if Yakult came in 1 liter bottles, then you would have to finish all of it in one sitting or else the benefits you get from it diminishes with each delay in consumption.

Moreover, one reason why Yakult comes in small bottles is because that amount (80ml or so) already contains all the “good bacteria” you need for the day.

Which leads to another frequently asked question about Yakult…

Is it safe to drink more than a bottle of Yakult in a day?

I remember a field trip to Yakult Philippines when I was a kid (yes, I was lucky to see their plant in Laguna) and one of the managers there said that it’s perfectly safe to drink more than one bottle of Yakult in a day.

However, he said that doing this won’t give you significant additional benefits. And by the end of the day, you just have one less Yakult bottle to drink for the rest of the week – you can buy more, but that would be costly in the long run.

Are you really telling the truth?

Of course I am. Here’s what Yakult Malaysia has to say about this:

Why is the Yakult bottle so small?

See I told you I’m telling the truth. 😀

12 thoughts on “Why Yakult Comes Only In Small Bottles”