If you go to Jollibee today, you’ll notice a new drink that they’re promoting for summer – the Watermelon Sprite Float.

Personally, it’s doesn’t sound really refreshing – maybe because I’m imagining all the sugar in the drink. You have watermelon flavored syrup, Sprite and of course, the vanilla soft-served ice cream.

However, curiosity got the best of me and so I tried it and surprisingly, it’s good! It’s not great but nevertheless, good enough to drink.

And yeah, I was right about the sweetness – but if you’re not diabetic, or you actually like soda floats… then Jollibee’s Watermelon Sprite Float is a good choice. It’s not that refreshing but at least, it won’t leave you thirsty and craving for water in the end. 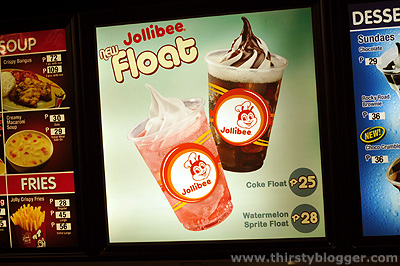 I guess the only thing I didn’t like about it, which goes to all soda floats being served in fast food restaurants nowadays, is the amount of ice they put in it.

I remember A&W’s rootbeer float which is one of the best soda floats I’ve tasted. They serve it in a frosted mug without ice so the ice cream eventually mixes with the soda, making it thick, creamy and yummy!