I met some friends the other day at the mall and we decided that instead of having the usual coffee after dinner, we go and try tea for a change. Immediately, it was agreed that we should go to The Coffee Bean & Tea Leaf.

CBTL is the only gourmet coffee shop I know that markets their teas as much as their coffee. That’s why it was a natural choice for us to have our “tea time” there. 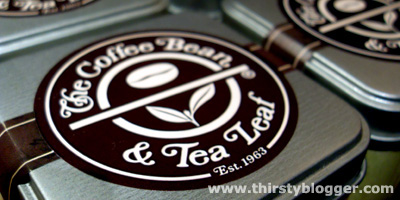 CBTL has a very wide variety of teas you can choose from. And if you’re a tea novice like me, you’d surely be overwhelmed by the choices you have in their store.

But in general, you have the basic groups of Black, Green, Oolong and Herbal Infusions. Each group will have a list of specific teas with different characteristics which includes aroma, body, flavor and origin. 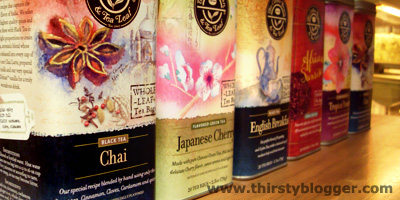 Thanks to the wonderful staff at CBTL, I learned that Black teas are those which underwent full oxidation while Green teas are the ones whose oxidation was controlled to a minimum.

Oolong is somewhere in between while Herbal Infusions are those which are 100% caffeine-free (and not actually made from tea leaves but dried fruits, berries and other crops). And there are also decaffeinated teas in CBTL which are 97% caffeine-free. 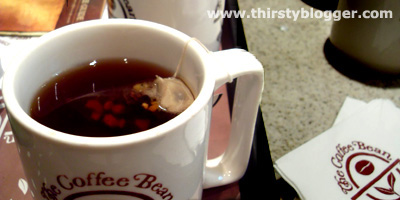 Enough of the tea lessons and on to the actual tea drinking. Upon the recommendation of the barista / tea blender, I had for myself an African Sunrise – a full-bodied exotic tea with a mild, sweet taste and an aroma somewhat like honey. (That’s according to their website 😛 )

So what’s my verdict? Well, it’s actually nice and soothing. I’m sorry I cannot really tell much for I’m not really a tea connoisseur. Maybe next time, when I try their other teas, I’ll have more to tell.

In the meantime, I’d like to share with you a creative non-fiction I wrote almost a year ago at CBTL in Bonifacio High Street. The story is posted in my other blog and is entitled, Morning Rituals.

The Coffee Bean & Tea Leaf is a Los Angeles, California-based coffee chain. It is owned and operated by International Coffee & Tea, LLC. You can visit their official website here.