Years ago, three Fine Arts students of the University of the Philippines Visayas Cebu College decided to go into the restaurant business. Taking the first letters of their names, they gave birth to Mooon Cafe.

And more than a decade after, I was finally able to visit one of Cebu’s pride and try out their very famous Sun Cooler drink.

That’s their branch in Park Mall, Mandaue above. They have several branches in Cebu, including their main branch inside Andres Abellana in Guadalupe (Cebu).

And ever since Pages Holdings Inc. acquired the business, Mooon Cafe has been aggressively expanding into other parts of the country as well. They now have franchises in Iloilo City and SM City North EDSA in Manila! 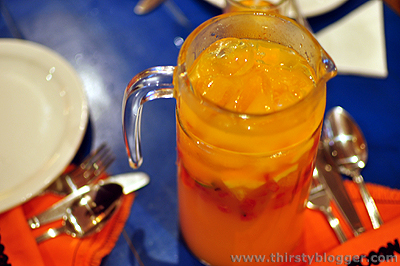 Now you know where to find Mooon Cafe, let’s talk about that deliciously refreshing beverage above – the Sun Cooler.

It’s orange juice with lemon, calamansi and watermelon. I believe the base of the drink is instant orange powder (Tang?) but by adding those citrus fruits and mixing in chunks of watermelon – the drink became a unique stroke of genius. 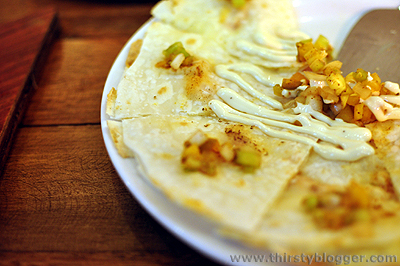 Mooon Cafe is a Mexican-inspired restaurant. Above is the Quesadilla Veracruz, one of the best Mexican fare they have on the menu. But beyond the fajitas, ensalada and tacos are pasta, steaks and pizza – all at very reasonable prices.

In any case, whatever you choose to have when you visit Mooon Cafe – I’d advise that you skip their bottomless iced tea and order a pitcher of their best selling drink instead, the Sun Cooler. 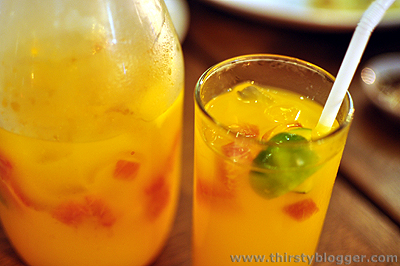 One thought on “Mooon Cafe: Sun Cooler Drink and More”