This blog has been pretty lifeless in the past month so let’s revive it and start the new year by taking a look at Magnolia’s Lifedrink – the fruit drink with glutathione.

So I guess beverage manufacturers have found another ingredient to put in drinks aside from L Carnitine because this one, doesn’t promise to make you thinner, but instead helps your skin to have a “blooming glow”.

What is glutathione?
Glutathione (GSH) is a tripeptide that functions as an antioxidant, preventing damage to important cellular components caused by reactive oxygen species such as free radicals and peroxides. (Source)

So GSH is indeed beneficial for you. But you should know that the human body is actually capable of synthesizing glutathione – which makes this drink non-essential and just supplemental. 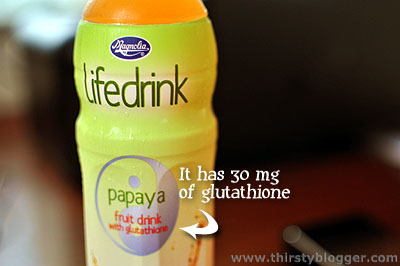 Anyway… just in case you’re wondering how Magnolia Lifedrink tastes – I’d say that it’s just okay. I tried the Papaya flavored variant and it’s a bit too sweet for me.

Perhaps next time, I’ll try the Four Seasons variant, which has a different anti-oxidant called Pycnogenol.