The newly opened wing of the Alabang Town Center has given metro south a handful of new dining and drinking places for me to try.

One of them is this tea place called Gong Cha – which never fails to move me into a PCD song whenever I see it. 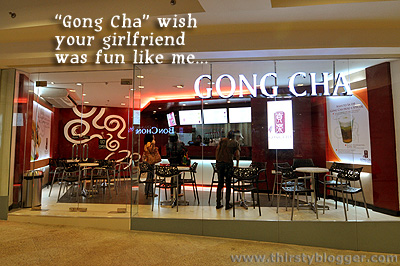 Gong Cha has over 100 outlets worldwide, from Taiwan where it originally comes from… to Hong Kong, Singapore, Macau, China and now, in the Philippines. They describe their products as “Tea Fit for Royalty”.

I was feeling a little under the weather that day, so I opted to order their Lemon Winter Melon Tea, so I could get a dose of C’s. 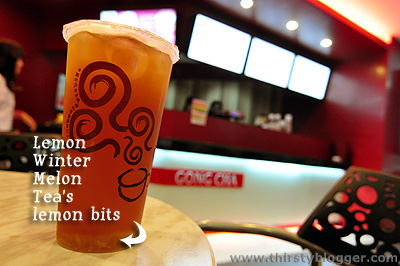 I found the drink interesting. It actually tastes sweet, with a tangy burst of zesty flavor whenever you get those lemon bits.

All my friends said it tasted like “lemon air freshener” – which made me laugh. But personally, I liked it… and just concluded that this one’s an acquired taste.

In any case, I know this won’t be the first time I’ll be visiting Gong Cha.

Perhaps next time, I’ll try their best sellers and tell you what I think.