Davao is home to a lot of locally-owned coffee shops and one of the most popular would have to be Blugre Coffee.

It is Davao’s first specialty coffee shop which started way back in 1998. And I had the chance to visit their main branch at Matina Town Square in Davao last May. 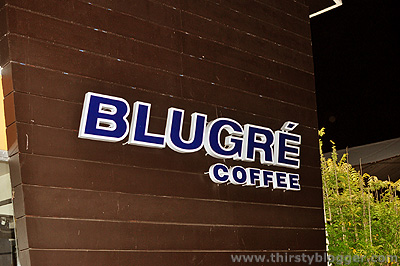 I was a bit buzzed that night 😛 – so I opted to drink hot tea. I can’t really remember what I ordered but it sure calmed my nicotine-deprived nerves (because Davao City has a well-implemented No Smoking policy).

A friend of mine tried their Mocha Larcepuccino – their very own non-coffee ice-blended drink. It’s named after Larcy Gathchalian, one of the founders of BluGre Coffee (the other founder, Gatchi, is her husband).

Currently, Blugre Coffee has five branches. Three are in Davao, which is company-owned and two are in General Santos City, which are master franchised by none other than Manny and Jinkee Pacquiao.

I’m going to GenSan on September for the Tuna Festival and I hope I could catch Manny inside one of his branches there. Let’s cross our fingers to that.

I guess that’s it. Special thanks goes out to GensanBoy for driving us around Davao that night and for telling me all these facts and trivia above about Blugre.

2 thoughts on “Blugre Coffee in Davao”